An appetizer to start the blogging meal

I dig sliders. The first time I had them was at the Cheesecake Factory during college in Baltimore. How utterly American to enable its people to have a miniature hamburger before shoveling down their bacon double cheeseburgers. This is something I can support. An important part of this blog, too, is to not just be critical. It’s to emphasize the cooperative nature of food. You can’t just be a food critic. You have to love food. It’s a participatory exercise. So here is a slider recipe, in the spirit of creating something, as well as critiquing it.

The key to a good slider is bun-to-meat ratio. Too much bread masks and dulls the beef flavor. Too little bread turns into a greasy mess. A bun on a slider, or any burger for that matter, needs to add to the overall combination; in the alternative, it needs to at least not detract. It’s kind of hard to screw up a slider, come to think of it. Cheesecake Factory always had good ones. Crystal Burger is the king of the fast food slider. White Castle belongs only in a movie with Harold and Kumar.

When doing burgers of any sort, start with whole steak, preferably New York strip. This is extravagant, but when you can pick up the entire top loin at Costco for $4.35 a pound give or take a couple bucks, it is totally worth it. Grind a couple pounds of that up with four ounces of pancetta. This gives enough extra fat content to satisfy people who complain that you can’t just grind up steak because it’s too lean. Make it into three-ounce patties, careful not to overwork the meat. Pan fry them (iron skillet, please) for two minutes on one side, then one minute on the other. Top with cheese after they’re flipped.

But what about that all-important bun? Something too yeasty can be a touch overbearing; it’s like a champagne that has yeasty overtones that stomp all over the fruit. No, you need something else. Something with substance to it but that doesn’t intrude. My solution? Turn to a master. In this case, Joel Robuchon. 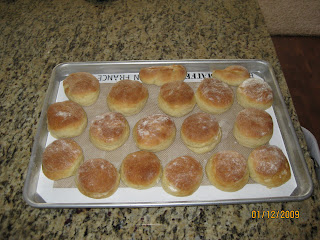 If you haven’t seen it or heard about it, Robuchon has an amazing new cookbook out, The Complete Robuchon. The general idea behind this book is to provide a method of French home cooking that is doable, more or less, for us servant-less American cooks. This book is executed with passion, skill, and precision. By reading the clear recipes, you can see it is done by someone with a true love of and respect for food.

As it happens, Robuchon produces a recipe that makes the ideal bread complement for sliders. It is his insanely simple recipe for brioche. The butter and egg of the brioche provide a richness and body that enhances but doesn’t intrude too much upon the slider patty, allowing the meat flavor to sing. To cut the heavier elements slightly, add some caramelized onions, which give an earthy flavor, and a ketchup made out tomatoes slow-roasted in the oven for four hours at 250 degrees and refreshed with a little champagne vinegar, which adds acidity.

That’s a lot of words. This wasn’t meant to be a full-bore recipe or detailed overview of these sliders. It’s supposed to be an appetizer. Let’s let a couple pictures do the talking and then get to the meal that is this blog started. 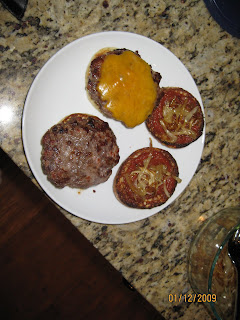 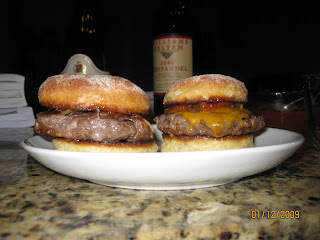 these sliders... are delicious.