You can hardly walk inside a restaurant without being accosted by a plate of sliders these days. It’s hard to understand where this started, but it’s not the most horrific trend to come about in food. What could be bad about adding more ground beef to the table?

What could indicate that sliders have arrived on the big, trendy stage better than Bryan Caswell, chef at the much-acclaimed REEF, has given Houston its very own slider-only restaurant named Little Bigs. Bryan Caswell is an excellent chef. REEF is a terrific place: their menu is fresh with solid creativity, and the wine program is one of the top three in the city in large part because of its eminently reasonable pricing.

The concept of Little Bigs is quality. Take REEF’s signature dish — reserving for a later time the discussion of beef being the most famous thing on the menu at what allegedly is the best seafood house in the country — put in fresh fries, milk shakes, a nice wine list, and an attractive patio, and there you have it. Late-night eats for the trendy.

There is one problem. The beef slider isn’t all that good. The bun is terrific, baked on-site, and adds value to the sandwich instead of just serving as a bland meat-holder. The caramelized onions are done well, and the Sriracha remoulade is a nice twist. That’s all well and good, but such things are sidelights. 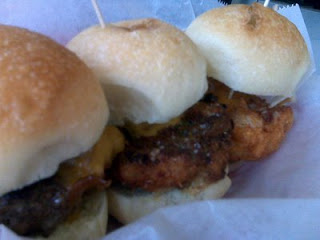 The problem is the patty itself. While it’s great that they grind their meat fresh daily and never freeze it, a half dozen encounters with Caswell’s sliders over the past several months confirm that the patty need improvement. The meat routinely is overworked, making it rubbery, chewy, and tough. The texture ends up making the burgers seem too greasy. And the sliders also never have the proper seasoning; they are either oversalted or undersalted. That is a mortal sin for any dish.

On a higher note, the chicken slider is pretty good. They do a nice job making a crispy, juicy hunk of chicken breast on that tasty bun. The fries are terrific, some of the best in the city. They are properly double-fried giving a nice crunch and pure potato flavor.

The atmosphere is also good. It reminds me a touch of the phenomenal Taylor’s Automatic Refresher in the Napa Valley, although the burger quality at Little Big’s isn’t in the same league. The outdoor area is laid back. The wine list is smart and reasonably priced. It’s open late and better than Taco Cabana or Jack in the Box. And, most importantly, the sins of that slider patty are easily correctable. The only fear is that because of Caswell’s success and the acclaim the sliders have gotten, he won’t bother to make them better than they need to be.
Posted by Unknown at 2:05 AM