The French Laundry has a tough job these days. Its reputation is so established, legion of fans so large, and margin for error so non-existent that it’s an easy target. Food is a deeply personal thing. A restaurant can be even more so. Chefs, like writers, put forward an intimate, creative side of themselves for public judgment. If that’s the case, then Thomas Keller is the cooking equivalent to Phil Jackson coaching in the NBA finals. He just doesn’t lose. He takes what he’s given, adapts to it, gets the absolute most out of it, and leaves you astonished. 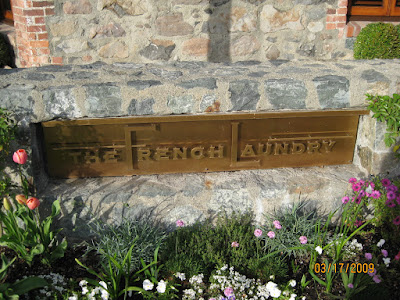 The French Laundry is a restaurant that doesn’t let you down. It is the place that encompasses the evolution and ascendancy of restaurants in the United States over the past forty years. It harnesses the power of Alice Waters’ emphasis on fresh, seasonal, and local ingredients, couples it with the very best in formal service with an influence of American casualness, and incorporates an elegant dedication to classicism for the food and décor. In short, the French Laundry is the restaurant that tries — and succeeds — at pleasing everyone. Or at least coming close.

Two recent trips to the French Laundry confirm this is the best restaurant in the country. Period. But to bestow such a sweeping superlative on the place undermines the true pleasure of the experience. Make no mistake, though, a meal here is a pure luxury. At $240 (service included) for a nine-course tasting or nine-course vegetarian menu, you’ll be lucky to make it our for less than $500 per person once wine comes into play. But it is the meal, if you have deep-seated passion for food, you owe to yourself at least once. Give up your Starbucks or Chick-Fil-A habit for a year. You won’t regret it. 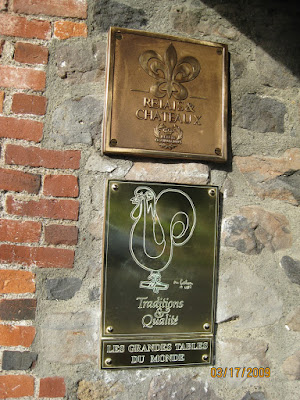 The first impression of the restaurant is how unassuming it is. You won’t notice it if you just drive down Washington Street in Yountville. Inside, the restored building is magnificent. Refined rusticity might have been invented here. The tables reflect the restaurant’s name: crisp, white linens; the napkin secured to white plates, shimmering from the soft light given off by wall sconces, with an old fashioned laundry pin. 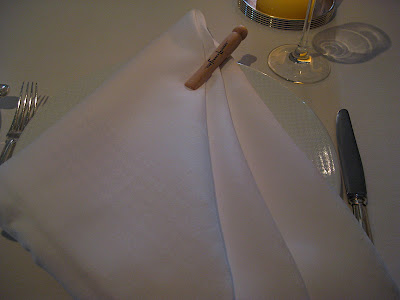 For an establishment that attracts such zealous lovers of food, the atmosphere is so relaxed and unhurried, you can’t help but feel at ease. It’s a remarkable feat, really, considering the ratio of servers to diners. With room for about sixty customers, the two-story dining room also accommodates seemingly forty staff. The remarkable thing is you can’t really tell how many servers there are because they are simultaneously ubiquitous and invisible. To create a pleasant, quiet environment while lavishing each table with attention is a remarkable feat. The only potential issue in the dining can be temperature: in the summer it can be stuffy, compounded by the jacket requirement for men.

Really, though, it is wasteful to spend so much time on the “experience” of the French Laundry because the last thing it aspires to be is an “experience” place. Nothing distracts from the food. The dining room isn’t flashy. The service, while impeccable, takes a back seat. This is all about the food, but recognizing the unmatched efforts that come from everyone at the restaurant would detract from the marvelous, leisurely perfection of a meal at the French Laundry. 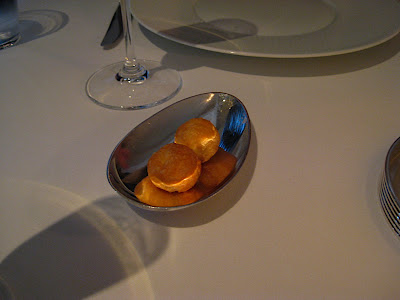 The starter rarely changes: two amuse bouche, the cheese gougeres and salmon tartare with red onion crème fraiche in a sesame tuile. This is an important first step. The gougeres show remarkable execution of the pastry, while allowing the gruyere to shine through clearly but not overwhelmingly. The salmon “ice cream cone” is legendary for good reason. It’s refined, playful, and delicious. The red onion crème fraiche provides a refreshing burst, and the tuile is so delicate you wonder how it can support the weight of the teaspoon of salmon. These are classic amuse, executed marvelously and betray that you are in for a treat. 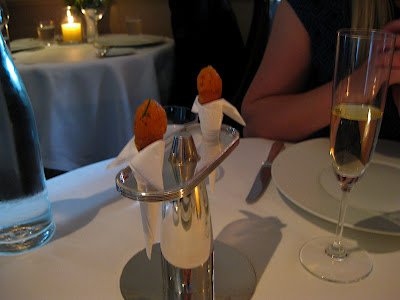 The first course also usually is the same: “oysters and pearls.” It’s essentially decadent tapioca pudding, delicate and flavorful with no shortage of butter. Two lightly poached oysters sit on top, with a generous dollop of California caviar. With Champagne, this dish simultaneously transports you to the good life and makes a resounding case for simple cooking. And the domestic caviar is a testament to efforts in this country to develop top-quality ingredients. 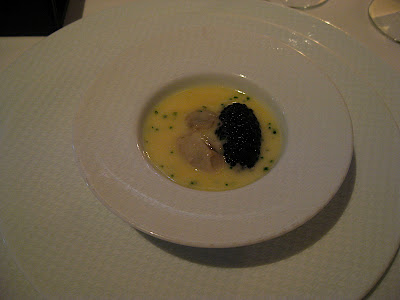 Next up is foie gras, if you choose, or a salad. The salad is always interesting and generally made from fruits or vegetables grown in the French Laundry’s garden, which sits across the street. The foie gras is well worth the $30 supplement. A terrine of pillow-like softness and elegance is enhanced by a celery branch and tart rhubarb that cuts the richness. Toasted brioche — a warm piece traded out for a fresh warm piece a few minutes later — leaves you smiling, another classic executed perfectly. The theatrical replacement of the brioche partway through the course is handled so matter-of-factly that it diffuses any possibility of pretentiousness. 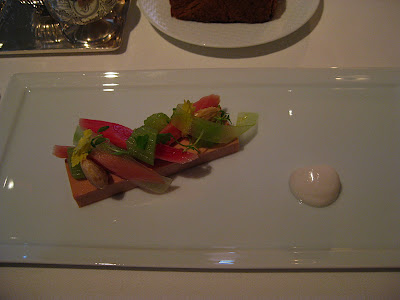 Third is the fish course. On the March visit, sous chef Corey Lee’s influence showed in a brilliant Japanese big fin squid dish, with pasta, green garlic, chorizo, sweet peppers, Spanish capers, and Swiss chard. You know the French Laundry can cook any piece of fish, and one of the choices will showcase that, but this squid showed such imagination, with the earthy kick of capers and chard to complement the fresh (and not tough) squid and slight spice of the chorizo. A dish ordered out of a desire to sample everything on the menu became a memorable standout. 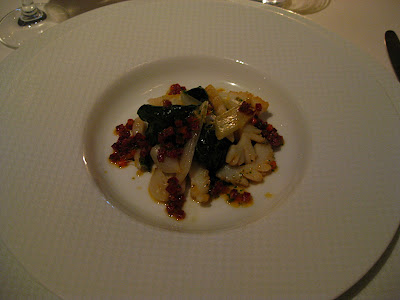 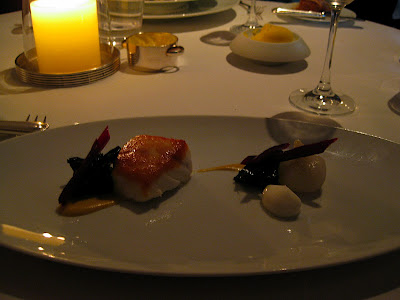 The first half of the meal rounds out with the lobster course. Normally you get mitts or tail poached in butter. Occasionally, they’ll be poached in olive oil. There is an inherent risk of lobster being slightly chewy, even at the best restaurants, and that was the case on one visit. But the complements in the spring — avocado, radish, fresh fennel, and niçoise olive — came with a cool citrus broth that allowed the lobster mitts to be a vehicle for a refreshing, invigorating dish. 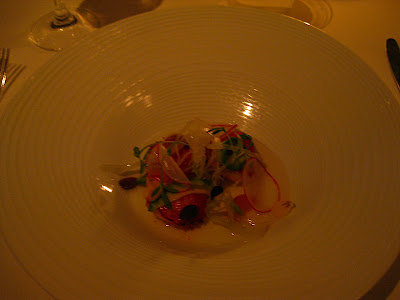 The meat courses rotate frequently. Chicken, pork, duck, beef, veal, and lamb all make appearances, in various cuts and preparations. Duck is a particular treat. This March, a duck breast served with English peas, turnips, mache, and intense black truffles made for a dream pairing with red Burgundy. As with each course, the individual ingredients shine through beautifully and complement one another; there isn’t interference. These flavors work together and aren’t shouting over one another, competing for the spotlight. 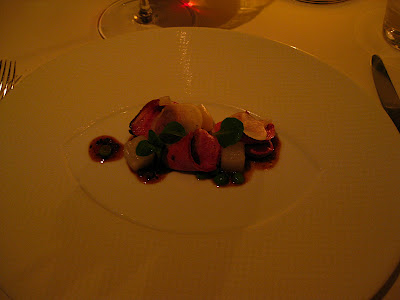 It’s at this point in the meal that you wish the French Laundry offered wine pairings. The rationale for only offering the wine list is that the menu changes daily, so keeping up with pairings would be arduous. The reality is that, while the menu will change daily, there is a spectrum of dishes the kitchen works with. Flavors change, but the core of the menu is constant enough to allow a course-by-course pairing. It is the one way the meal could be taken to greater heights, not that the wine list lacks in selection that’s perfect for the food.

The beef course on both visits was the cap of the ribeye, roasted to medium rare. Deeply flavorful and with the fat melted in, it’s a delicious canvas for bluefoot mushrooms and a San Marzano tomato compote that, after you finish relishing the intensely pure flavor, you realize is essentially the best ketchup you’ve ever encountered. 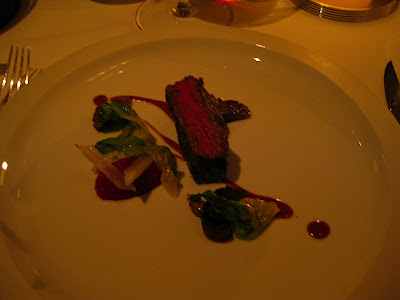 The cheese course always is a simple affair, showcasing a single cheese that is worthy of solo attention. It is followed up with a sorbet or sherbet. After the richness of the middle section of the meal, a buttermilk or fruit sorbet is just the ticket, like the acidic backbone of a wine keeping your palate refreshed. Buttermilk sherbet with sour cherries and a black tea foam — showing you foam may be passé but not necessarily boring or uninteresting when properly prepared and used — emphasizes how the menu plays with sweet and savory, refreshing and rich, and the earthy side of food. 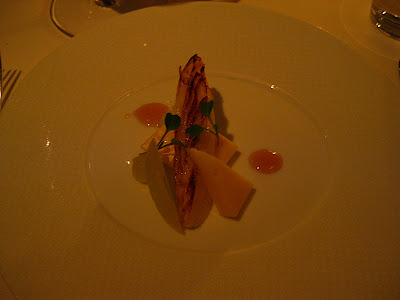 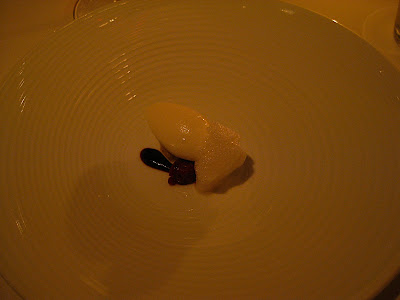 Dessert tends to walk the classical line, with chocolate mousse that reminds you why classics are just that, or lemon parfait that hits tart and sweet notes with equal force. So skillfully executed, it makes you feel like a kid again, bringing back memories of timeless favorites. 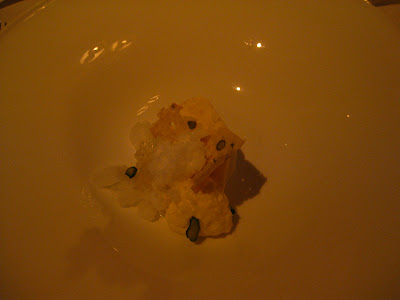 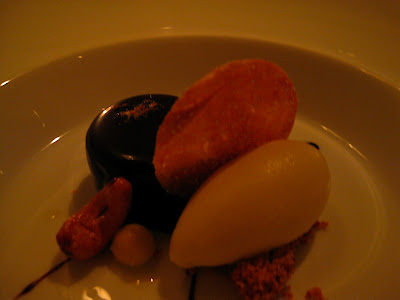 There's also a secret at the end of the meal. Ask if they have any "coffee and doughnuts." They do. But you have to ask. If they're available still, you will get the most delightful cinnamon sugar doughnut and espresso semifreddo. 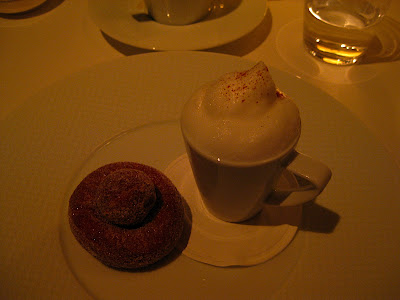 The French Laundry isn’t a meal that reads well. It’s something you must experience to realize the sheer perfection and enjoyment of it. Nothing is out of place. There are no missteps. Needs are anticipated; requests are met immediately. When a restaurant approaches every day with impossible expectations, it’s remarkable enough for it to meet them. At the French Laundry, Thomas Keller has assembled a brigade that routinely blows those expectations out of the water. There is no better restaurant in the country. Few even come close.

So, what did you drink? The Rhys PN for ~$175? I checked out their wine list and it is devoid of any real bargains, with most offerings being marked up 4 times, or more. Corkage anyone?

The wine list is extremely expensive, but there actually is some value to be had in the Burgundy realm. Well, you have to be willing to lay down a couple hundred bucks, but you can find some nice Burgs with age on them.

We did a glass of the house Champagne -- which was excellent -- and a glorious Riesling for about $75 and a really lovely Volnay 2002 for ... too much. But excellent.

Tom,
Great report. I look forward to my first FL visit. Soon, I hope. I've been having fun with the cookbook. Nice job here.

Tom,
Great report. I've yet to make it to FL. One day soon I hope. I sure have had fun, and been been humbled working through the cookbook!
Nice job.

Tom: You've done a great job of putting into words the pleasure I experienced at he Franch Laundry. Thanks.