In re Sparkle's Hamburger Spot

In re SPARKLE’S HAMBURGER SPOT

Opinion for the court filed by LAHAD, J, in which JJ. GUTTING and BRINKMANN join.

LAHAD, J. Before the Court is the submission of Sparkle’s Hamburger Spot (“Sparkle”). We hold that Sparkle, despite its nearly unconscionable sides, serves a flavorful and well-made hamburger thus warranting an A- rating.

Sparkle petitioned this Court in forma pauperis but declined to have counsel appointed. After the required Faretta colloquy, this Court granted Sparkle’s request to proceed pro se. Located on the corner of Dowling and Jefferson streets in Houston’s Third Ward, Sparkle consists of a small blue building that serves as the kitchen and front desk. Seating is limited to a pair of picnic tables that have seen better days. Based on discovery obtained, no one actually eats at Sparkle’s location. Rather, food ordered and taken to another location for consumption. The picnic tables provided at Sparkle, then, are primarily used to wait for one’s order. 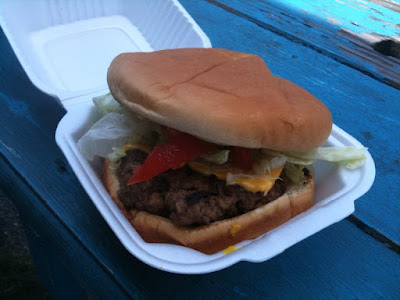 The extensive menu at Sparkle includes single and double versions of hamburgers and cheeseburgers, the expected sides, as well as some interesting fare like “pork chop sandwich.” Indeed, several amici have pointed to such unique menu elements, real ice cream shakes and local flair as factors. Pork chops and ice cream aside, this Court limits its holdings and reasoning to genuine burger cases and controversies. Petitioners and amici would do well not to view dicta within our case law as advisory opinions about sides, shakes, or scenery. However, it is emphatically the province and duty of this Court to say what the burger law is. 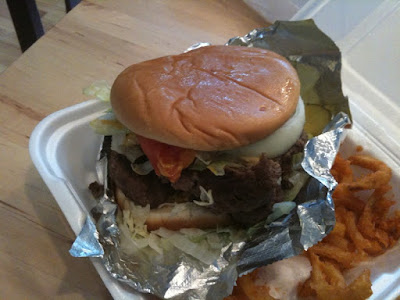 The Court reviewed three Sparkle offerings: 1) a double hamburger; 2) a cheeseburger; and 3) a double cheeseburger. The aforementioned lack of seating and the steamy weather forced the Court’s conference to Justice Brinkmann’s chambers.

While waiting for the burgers, this Justice observed a gentlemen in the kitchen grab hunks of ground beef and roll them into baseball-sized globs of meat. The resulting burgers indicated that these meat baseballs were the patties’ progenitors. Simply, the patties at Sparkle are, to use the parlance of our times, large and in-charge. Transporting the meals back to chambers constituted a workout sufficient to offset a few of the burgers’ calories. The fear, however, is that such large mounds of ground beef will have charred skin yet raw centers. At Sparkle the adept grill-mistress knew exactly how to handle the patties. Despite easily crossing the half-pound threshold, the patties on each burger were well-cooked to medium. 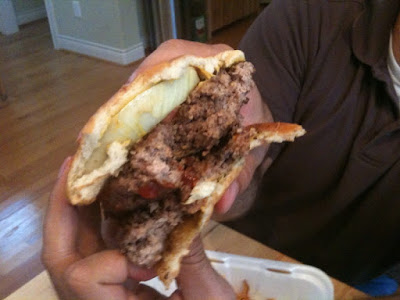 Similarly, often the larger a food item, the less flavor it has. Grapes are a prime example. Fortunately, the patty at Sparkle does not fall into this category. The patty was not too salty or peppery. Rather, it had a welcome beefy flavor, perhaps enhanced by its sheer mass. It would have been a major disappointment had Sparkle’s beefy patty been bland or tasteless. Special mention should be given to the temperature of the patties. The patties were piping hot even after the additional time from receipt to conference.

In a world of brioche and where custom buns are nearly as prevalent as custom wheels, Sparkle’s bun exemplifies ordinary. Of the three burgers, only the double-hamburger’s bun integrity failed. The other two pairs of burger buns held up to the patties. The potential culprit could be the additional patty on the double- hamburger. This is, however, difficult to reconcile with the fact that buns on the double-cheeseburger maintained their structure. 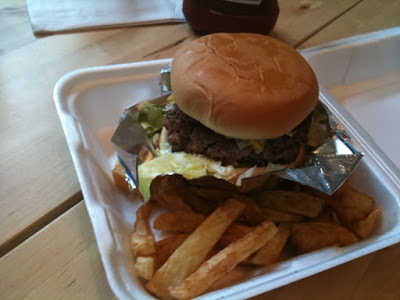 A continuing debate among members of the hamburger bar concerns onions. The question is not whether onions should be include, for it is well-accepted that onions enhanced flavor and freshness and add moisture. Rather, the debate surrounds whether those onions should be diced or not. This Justice’s hamburger had a single large ring of onion – about 4 inches in diameter and about ¼ inch thick. Regardless of one’s position about onions, it is evident that a single fat onion ring on a burger results in the awkward pull-the-entire-ring-out-in-a-bite situation. Highly disfavored.

Sparkle offers the basic side items as well as chili-cheese variants of each. The approach to sides at Sparkle is the exact opposite of its approach to burgers. The French fries were an odd consistency conservatively dusted with some kind of seasoning. The curly fries almost eluded review for lack of sufficient fries to review. The $2 order of chili cheese curly fries lacked the chili and cheese and maybe came in at 1 oz. Poor form on two counts.

As this Court has made clear, a party is reviewed on burger alone. Suffice it to say that this standard has benefitted several parties. In sum, this Court finds that Sparkle burger serves a large juicy hamburger, well seasoned and cooked, that warrants an A- rating.

IT IS SO ORDERED.

Gutting, J., concurring. I join the Court's opinion but write separately to explicate on Sparkle's side dishes. Deplorable, though inexpensive, they are, it is virtually impossible to judge what, if any, merit they have. The sample size simply is too small. Eating an order of Sparkle's fries is like taking the slightest gasp of air. It is essentially without substance. Or sustenance. It is fortunate for Sparkle's Hamburger Spot they make such outstanding and generous burgers. This Court cannot and should not allow itself to be distracted by lesser subject matter in its pursuit of burger justice, as the final (and correct) judgment of Sparkle Burger has been rendered today. I applaud my learned brethren for this judicious evaluation of an excellent hamburger.

Yum - am I missing the addresses for these great burger places or is my own reserach required?

We haven't posted addresses for any of the burger reviews. That is, quite possibly, an important thing for the Court to consider. Thanks for pointing it out.

Sparkle's Hamburger Spot is located at 1515 Dowling in Houston.